Some months ago, wanting something to watch while I ate my ramen and eggs, I happened on that guy, what’s his name–he’s that food guy, had a history of drug abuse, oh c’mon, I can’t think of his name — anyway he was visiting his BJJ school run by the erudite and somewhat ramshackle, sports-tape-covered, sweary teacher by the name of Kurt. Kurt’s great. Anyway, this lanky, silver-haired food guy, former chef and writer, was yacking about his training. And I was inspired to think about things from a viewpoint slightly outside my norm.

See this is the thing, Jiu-jitsu belongs to me. I know there are lots of people doing it, and some of them are of such astonishing skills we learn their names like household words, names like Marcello, and Rickson, and Leandro, and Chavo . . . the list goes on and on and I might have caught some of Lucha Underground after watching the food guy. Just the same, the point is I don’t think about them much. I mainly DO jiu-jitsu. Every day of the week in some form or other I’m on the mat, sometimes more than once. I’m doing jiu-jitsu and teaching jiu-jitsu to fine folks. I don’t think of it as something that I’m transferring like a product that I purchased from Amazon. I think of it as something more like little stories to tell. In the same voice I might say, “There was this one time I was fishing off the Narrow River Bridge . . .” I say “So if I were you, I’d add this little sweep, here’s a good spot for it . . . ”

It belongs to me, and then it belongs to you as well. That’s how this works. Now, I’m watching it belong to someone else as well on this television show (this show is about this guy with the best life ever– traveling and eating). He says: “I’ll never be a black belt, . . . but that’s not the point.” And I think, fantastic, he’s got it! And I didn’t even have to tell him. I didn’t have to explain to him that he needs to give himself a chance and be like a kid, just come and play and don’t worry about anything. Which is what I tell everyone. When you’re a beginner is the best time because you’re totally not responsible. You are there to enjoy the rides and play the games. Then the TV guy said: “It’s a no douchebag zone.” and I thought YES! He’s got that right too. Someone did a good job teaching him. And I’m so dumbfounded by this idea that there’s other people out there doing this, and properly educating people that it causes me to realize for just a moment that it’s not JUST mine. That there’s a whole huge community of folks doing it and doing it well!

Why should this surprise me? Obviously I came from an academy with a teacher (Roberto! another of those names!) and I trained with lots of folks who grew up to become amazing jiu-jitsu teachers themselves so why  — how could I be so silly to think this belongs to me?  Because it’s how you become good at something. You make it yours. You own it. The TV guy reminded me of that point. He brought me enough out of my routine  to impress upon me that there’s some folks out in California doing what I do. Names and names and names . . . but you don’t need those names. Are you getting this? Are you seeing this? 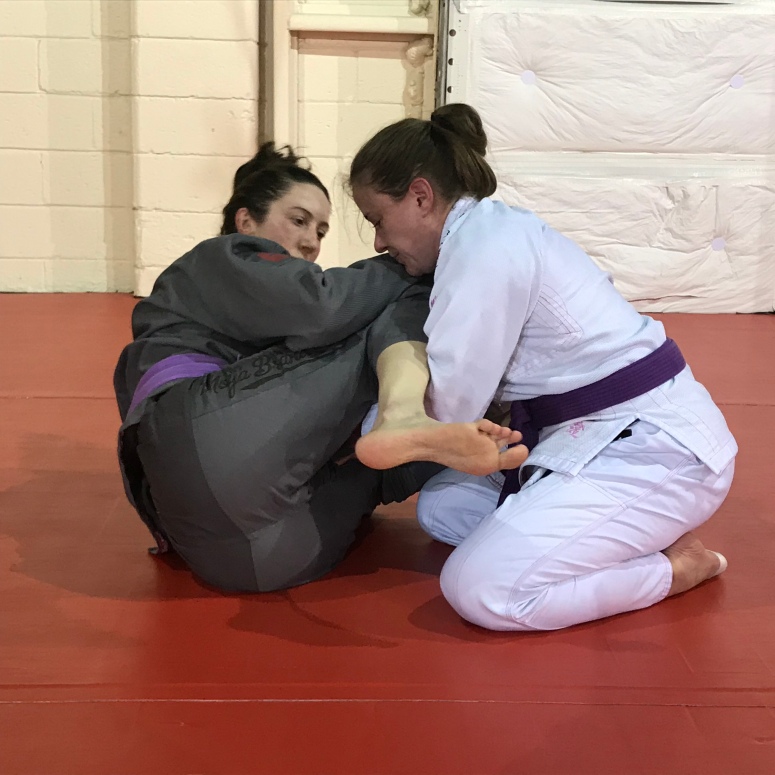 You might know these ladies. You might not. But Jiujitsu is theirs, see? Note the concentration, enjoy their spirit. 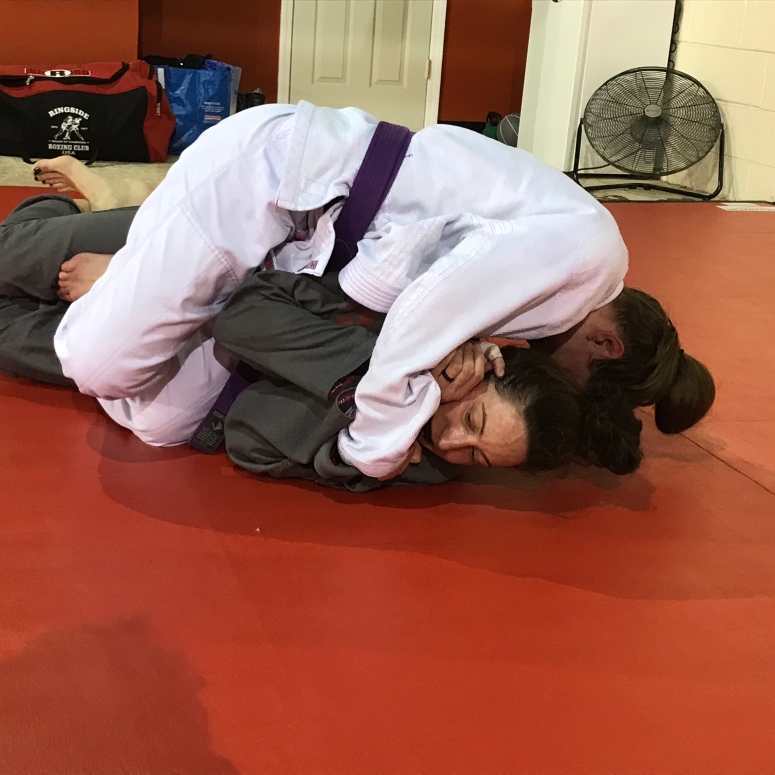 They work hard, they sweat, and they enjoy themselves. And they are Jen and Megan. And it’s all theirs.

And I’m there too, and this is all ours. 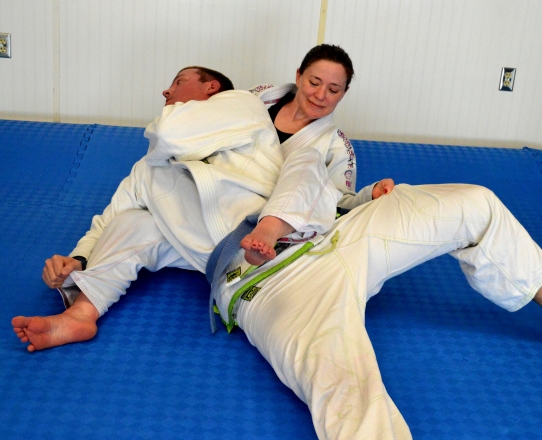 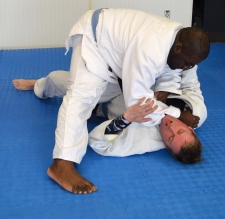 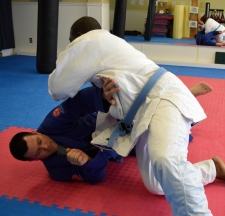 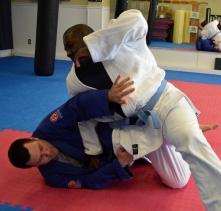 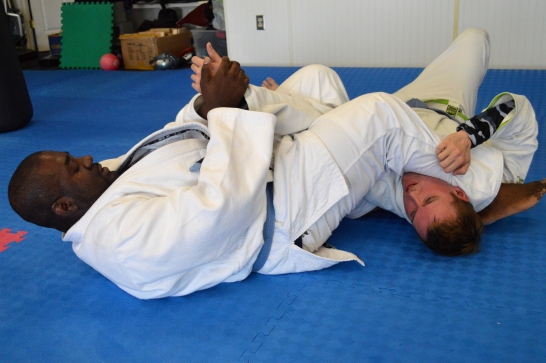 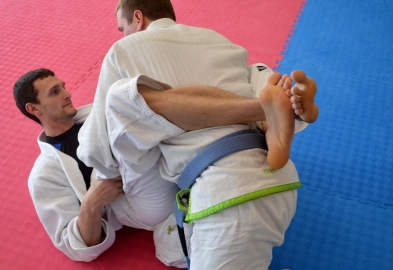 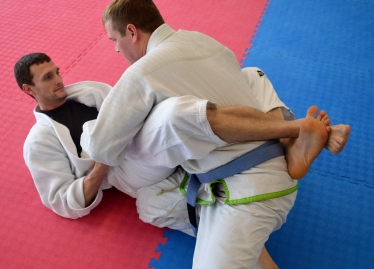 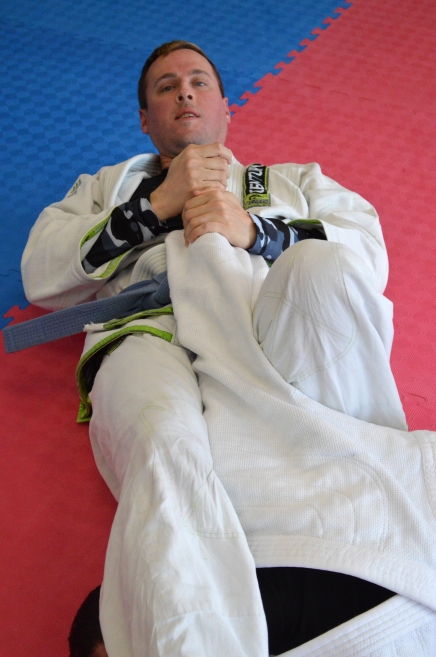 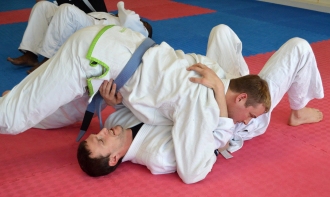 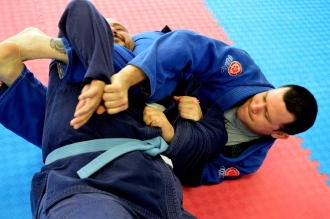 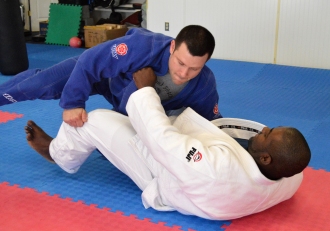 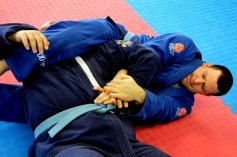 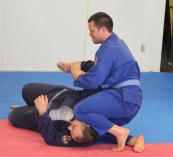 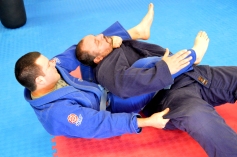